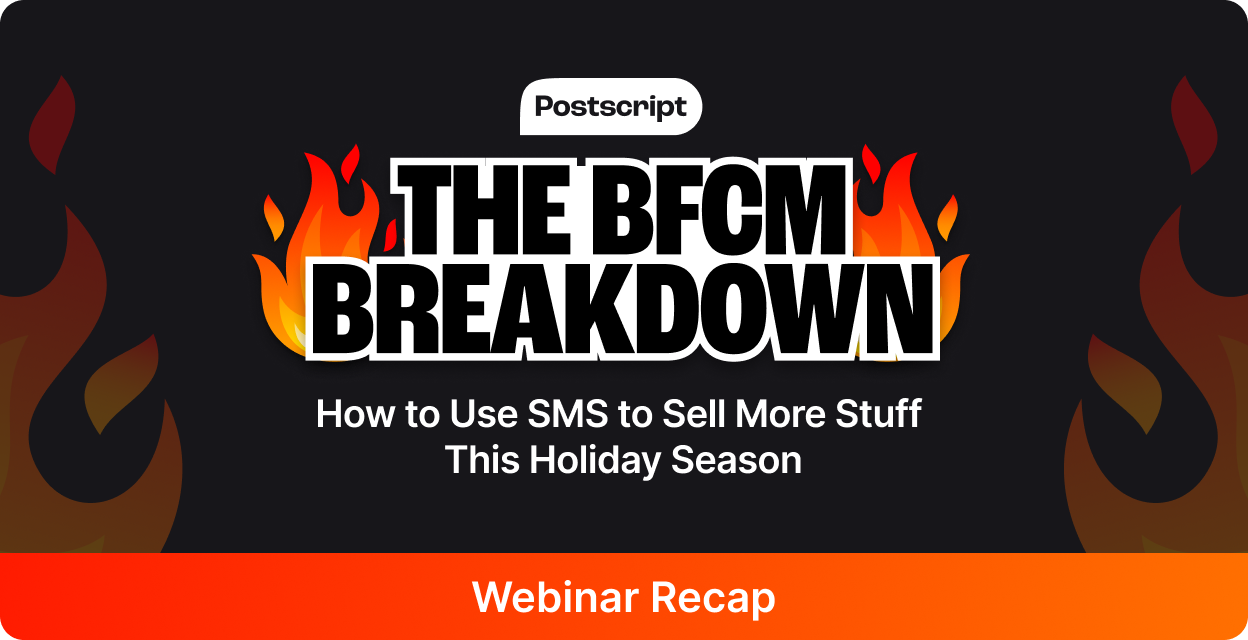 The BFCM Breakdown: Watch Our Webinar for Top SMS Strategies for Cyber Week

If there is anyone who can offer impactful advice on how to use SMS to your advantage during Cyber Week, it’s these three merchants who ran some of the highest revenue-generating of all 8,000-plus Postscript merchants during BFCM 2021:

So, we were thrilled to welcome them to the virtual Postscript stage for a special webinar on SMS strategies for BFCM.

Find out how these top brands harnessed the power of SMS leading up to Cyber Weekend, which strategies they used during BFCM, and what they plan on doing this year to build on their incredible results.

Watch the full recap below or skip ahead to read a quick summary of what we learned.

5:30 Engaging Their Community Year-Round with SMS

One common narrative for each brand was that they don’t just use SMS during big sale weekends. Instead, they see it as a way to connect with customers and subscribers throughout the year.

Yummie O of Yummy Extensions says she treats SMS like a “Girl Group Chat,” a sentiment Mina Hadjian of Organic Olivia agreed with.

“Our community always comes first, and SMS really opened those gates for us to connect with them on an even more personal level, allowing us to deepen those relationships,” said Mina, adding that it’s not uncommon for their founder Olivia to send out super personal messages—like the one asking subscribers to help name her new dog!

Drew Cowan of Dr. Squatch shared that last year during BFCM, SMS actually outperformed email for the first time in terms of revenue—even though their SMS subscriber list is smaller than their email subscriber list. And that trend continued in the months that followed.

“We’ve continuously seen SMS drive more revenue than a lot of our other channels,” she said.

Part of Dr. Squatch’s success came from their willingness to simply send messages. Drew says the team committed to sending a text any time they had something to say—whether or not it was promotion-related. The key, she says, is making texts “short, sweet, and to-the-point” during such a high-volume messaging period.

Last year was actually the first time Organic Olivia used SMS during Black Friday and Cyber Monday, so they focused heavily on list growth in the months leading up to Cyber Weekend. To help drive opt-ins, they promised their SMS audience early access to their BFCM deals. And based on the results of their early access sale, that approach definitely worked.

“Our SMS list is nowhere near our email list in size, and I believe almost 40% of our sales that weekend came from our early access day,” said Mina. “It just goes to show that those who provide their phone numbers are not only here for the fun SMS chats, but also are the most loyal and highly engaged customers.”

Yummie also sees super high engagement rates among her brand’s SMS subscribers. One interesting approach she uses to drive engaged opt-ins well in advance of BFCM is  shutting down her website for 24 hours in October and requiring visitors to sign up for SMS in order to access her big fall sale.

Last year, this strategy generated about 800 new SMS subscribers in one day. That set Yummy Extensions up for a very successful BFCM.

“We saw that 46% of our total Black Friday revenue came from SMS last year,” said Yummie.

For Organic Olivia, transparency is a big part of their brand ethos. They extend this practice to how they talk about upcoming sale events as well.

“We promote Black Friday as our biggest and only discount of the year—which is true!” said Mina. “At times, we may extend the sale based on customer demand. But, we never offer a deeper discount as the weekend goes on.” They also wait until Friday to send out any marketing communications, letting subscribers focus on family during Thanksgiving Day.

Dr. Squatch primarily uses email to tease out new product launches or sales, but they also leverage email to try and convert that list into SMS subscribers.

And especially during the holidays, their most loyal tiers of customers on SMS will get notified about sales and product launches before anyone else. Drew also says that this year, they may try a few new things on SMS—like offering additional exclusive discounts for products that are already discounted on the website. “We’re being flexible,” she said, adding that they want to give themselves room to respond in the moment—especially considering that customer behavior is a bit unpredictable in the DTC world right now.

25:00 Planning for Promotions in a Post-Pandemic Era

Although we’ve talked to many merchants about how the post pandemic boom seems to be slowing to a more normal growth pace—with some merchants down as much as 15% in YOY sales—this didn’t seem to affect how our top brands were planning their BFCM promotions. In fact, their plans will, by and large, stay the same.

In addition to doubling down on what worked well last year, they will—as Drew mentioned—give themselves the freedom to respond in the moment based on customer response.

No matter what, their SMS audience across the board will continue to get VIP access to all sales.

In Yummie’s words, ““Exclusive access is everything.” Just like last year, she’ll give her SMS list early access to Black Friday deals so they can make their purchases before everyone else—a strategy that, as we mentioned above, led to nearly half of her brand’s total BFCM sales coming from SMS.

But like Drew, Yummie will leave room to adjust in real time. “The day of the sale itself, we may need to make some minor changes as we go,” she said.

35:00 Leveraging Their Favorite Postscript Features for BFCM and Beyond

One Postscript feature that enables brands to remain flexible and adjust send strategies in the moment is our deep list segmentation.

As Mina mentioned, while you can pre-create segments all you want, “There’s really an in-the-moment type of segmentation that happens during BFCM weekend.” For example, if a particular product gets a lot of traction, you may want to send out a follow-up message promoting a complimentary product to those who purchased.

Drew, on the other hand, says that while segmentation can be really helpful, she encourages brands to take this opportunity to message more liberally than they do during other times of the year—because at the end of the day, customers are expecting that. “I think you can test at least going broader than you normally would, and you can always scale back if you need to,” she said.

While we weren’t able to get to every audience question—there were just so many great ones!—our guests answered as many as they could during the live event. Here were the most frequently asked ones—and their answers.

Any suggestions for writing good SMS copy for BFCM?

Drew emphasized the importance of understanding your unique brand voice. For Dr. Squatch, that means being short, sweet, and to-the-point—but perhaps your audience responds best to longer, more heartfelt messages. Yummie also encouraged the use of emojis—something that is pretty specific to SMS and helps make messages feel even more conversational and personal.

Whatever your approach, now’s the time to test your promotional messaging so you have those learnings going into November and December!

How do you decide what to message your customers during BFCM? Do you rely on just promotions or is it a mix?

Yummie says that if you are offering promotions, that should be the main focus of your texts during BFCM, because that’s what the customer is expecting. “This is not the time to talk about housekeeping stuff or anything outside the parameters of the promotion,” she said. While you definitely want to add value through the SMS channel, keep in mind that during this time of year, the value customers are looking for is savings and sales.

That being said, if you aren’t running any promotions, it doesn’t mean you can’t text your subscribers over BFCM. As Drew mentioned, you can add value in a different way—by sending holiday recipes or playlists, for example.

Besides obvious automations like abandoned cart and welcome series, are there any automations that have performed really well for you?

Mina says that for Organic Olivia, personalization has been key to automation performance. For example, they leverage keyword responses to divide subscribers in their welcome flow into content-based categories. “Once we get people into these buckets, we can send more messages on that particular topic,” she said.

Organic Olivia also runs a zodiac automation that uses a similar structure. Subscribers reply with their sign, and they receive a response matching them with an herb. The brand can also leverage that zero-party data in the future to provide additional recommendations for products or rituals. “It’s impossible to do one-to-one [messaging], but this is as close as it’s gonna get when we’re speaking to a big community,” Mina said.

Do you think the “shutting down” approach would work for a company with a smaller audience?

In Yummie’s words, “I don’t see why not?” There’s no harm in giving it a shot—even if you do it for 12 hours rather than the full 24. The key, she says, is being “a lot more intentional about your communication and inform them ahead of time.”

Additionally, actively promote the sale with your community on social and encourage them to share the information with their friends. “News travels,” Yummie said. “It’s like a sorority…people want to be a part of something.”

Do you feel some resistance or see a spike in unsubscribe rates during non-holiday or non-sales days?

At what frequency do you text your subscribers outside of BFCM versus during BFCM?

While BFCM is a high-volume messaging time for many brands, Mina says they also send a lot of messages other times of the year—during product launches, for example. “When we launch a product, we send so many teaser texts,” she said. “We might send one a week or two a week about one particular herb or formula, and that feels like a lot when you’re talking about one thing—but we get good responses.”

The bottom line: “If you’re trying to build hype, don’t be afraid of the volume,” Mina continued. “Go for it, and let your metrics tell you what’s going on.” For example, if unsubs spike, then you can pull back.

Another great piece of advice: If you’re sending multiple messages in a week, make sure there’s a mix of promotional/product content and educational content. “It’s that balance that’s really key,” Mina said.

Looking for more help with your BFCM strategy? Be sure to snag your copy of The Ultimate BFCM Planner for SMS Marketers right here—and stay tuned to the Postscript Blog and your inbox for more resources as we move closer to Cyber Weekend! 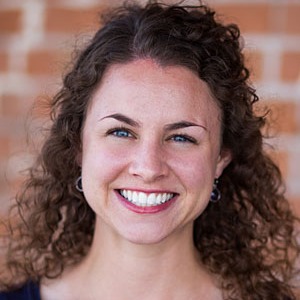 Brooke Andrus is a Senior Content Marketing Manager at Postscript. A journalist by trade, Brooke now uses her nose for news to keep ecommerce merchants informed on industry trends and business best practices.